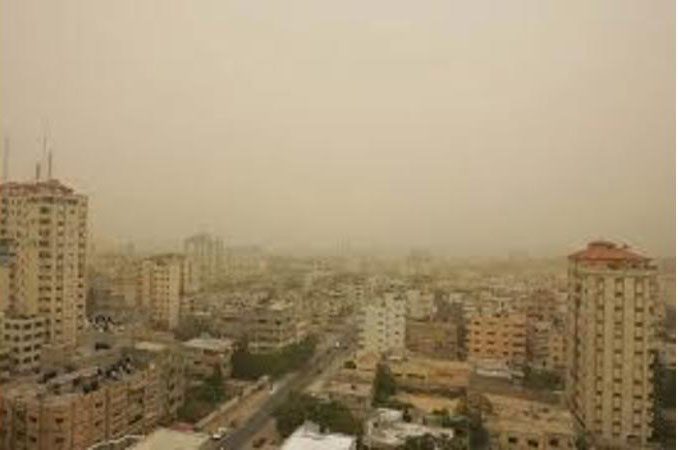 Amman, March 26 (Petra) -- A slight rise in temperatures is expected on Thursday, so spring-like weather conditions will prevail across the Kingdom, but clouds at various altitudes will start to build up in the evening due to a Khamasini air depression, the Jordan Meteorological Department (JMD) said in its daily brief.

The Khamasini depression's name is derived from khamsin (50) in Arabic, as it occurs during the 50 days from the end of March to 10th of May.

The depression today will bring partly cloudy and dusty conditions with spotty showers in various areas of the country, while winds will be southeasterly moderate to brisk, the JMD expected.

The Department warned of poor visibility, mainly in the Badia regions, and of slippery roads.

In the southern city of Aqaba, warm weather is expected with clouds at medium and high altitudes and a chance of intermittent rain, while winds will be northerly to southerly moderate to brisk and stirring dust, the JMD added.

Similar warm conditions will persist on Friday with clouds at various altitudes and a possibility of scattered showers accompanied by thunder at times, mainly in the eastern regions. Winds will be southwesterly moderate to brisk, raising dust and causing low horizontal visibility, specially in the Badia areas, the JMD noted.

Mercury levels will drop again few degrees on Saturday. Therefore, spring-like and fair conditions will prevail nationwide with low-altitude clouds and a chance of intermittent rain in the northern and central regions, while winds will be northwesterly moderate to brisk, causing dust in the desert areas, the JMD further said.

Daytime temperatures expected for today will reach 21 degrees Celsius in Amman, 16 in the northern cities and 19 in the southern governorates, dropping down to 11, 8 and 7 respectively. The weather will be warmer in the port city of Aqaba with highs reaching 30 degrees Celsius and lows standing at 19.